The Federation of Asian Canadian Lawyers (FACL), a member of the Roundtable of Diversity Associations (RODA), encourages all its members to vote in the upcoming Law Society of Upper Canada Bencher elections to be held on April 30, 2015 and increase the diversity of Benchers at Convocation.  For complete details about the election, please visit: http://www.lsuc.on.ca/bencher-election-2015/

FACL thanks the candidates who requested our endorsement and wish all of them the best in the final legs of their campaigns.  For details about FACL’s Endorsement Policy regarding candidates for awards, elections or appointments to a particular position in public office, a professional organization or a self-governing body of the legal profession, please CLICK HERE.

FACL is pleased to officially endorse Janet E. Minor (current Treasurer of the Law Society) and Julian Falconer, along with Avvy Go, Sandra Nishikawa and Paul Schabas as candidates in the upcoming bencher election.  We encourage all FACL members to vote for Janet, Julian, Avvy, Sandra and Paul.  They have all made significant contributions to our profession and the broader community, especially on the issues of access to justice, diversity and equity.  We strongly believe that they will continue their demonstrated commitment to these principles if elected to Convocation.  Please take the time to review their profiles and platforms at the below links:

Janet E. Minor was elected by Convocation to serve as the 65th Treasurer of the Law Society of Upper Canada in June 2014.  She has worked in public law since 1977.  Up until her election, she was general counsel in the Constitutional Law Branch of Ontario’s Ministry of the Attorney General.  She was first elected as a bencher of the Law Society in 2001 and was re-elected in 2006 and 2011. She has served on a number of committees including chair of the Professional Development and Competence Committee and the Equity and Aboriginal Issues Committee, as well as a member of the Access to Justice Committee and the Retention of Women and Challenges Faced by Racialized Licensees working groups.

Most recently, Treasurer Minor played an integral role in the introduction of Pathways, an innovative project undertaken to address the shortage of articling placements, involving significant changes to the experiential training component of the Lawyer Licensing Process.

Treasurer Minor is a founding director of the Association of Law Officers of the Crown (ALOC) and past director of The Advocates’ Society. She has also served on the boards of the Law Foundation of Ontario and the Ontario Justice Education Network.

Julian is a Bencher of the Law Society of Upper Canada and in that capacity serves as Co-Chair of the Equity and Aboriginal Issues Committee and Vice-Chair of the Task Force addressing Challenges Faced by Racialized Licensees. In addition to extensive writings on issues of race and civil liberties, he has also co-authored a book on Coroners Inquests in Ontario.  To view Julian’s platform for re-election, please visit: http://falconerforbencher.com/

Julian’s litigation practice takes him to civil, administrative and criminal courts at both the trial and appellate level. He has argued cases in both English and French.  A major component of his work has involved advocacy in human rights and public interest litigation representing numerous First Nations communities across Ontario.

Julian has acted as counsel for numerous community service organizations including Aboriginal Legal Services of Toronto, the Association in Defence of the Wrongly Convicted and the Urban Alliance on Race Relations. Julian’s more prominent individual clients have included Maher Arar, who made Canadian legal history in receiving the largest human rights settlement allotted to an individual plaintiff; the family of Ashley Smith, the 19 year who died in custody at Grand Valley Federal Penitentiary; and Adam Nobody and the “Free Press Four” in relation to their unlawful beatings and arrests during the G20 summit in Toronto.  Julian currently acts as Independent Counsel to the Chair of the AG’s Iacobucci Report Implementation Committee and the Falconers team is also providing the legal support to NAN in its ground breaking volunteer jury initiative in northern remote communities (“Operation Invite”), an initiative aimed at redressing the exclusion of Aboriginal communities from jury rolls in Ontario.

Avvy Yao-Yao Go is a founding officer of FACL who is seeking re-election for Bencher.  She was last elected to the position of bencher of the Law Society of Upper Canada at the June 27th Convocation of the Law Society.  For more information about Avvy’s platform, please visit: http://www.lsuc.on.ca/WorkArea/DownloadAsset.aspx?id=2147484666

Avvy Go has served as the Clinic Director of the Metro Toronto Chinese and Southeast Asian Legal Clinic since 1992 and has spent her legal career working as a passionate advocate for legal aid access and for the furtherance of equity within the legal profession.  In 2007, along with Superior Court Justice Maryka Omatsu and Lawyer Julia Shin-Doi, Go organized and launched FACL.

Sandra Nishikawa is a long-time advocate of equity and diversity issues, and current Chair of the Equity Advisory Group of the Law Society.  If elected as bencher, one of Sandra’s main priorities is equity and inclusion in the legal profession and giving voice to equity-seeking groups at Convocation.  For more information please visit: www.sandraforbencher.ca.  Sandra was also recently interviewed about her campaign by Law Times.

Sandra was a founding member of FACL and was most recently the VP External (Public) and Director from 2012-14.  She has contributed significantly to FACL over the years, as Chair of the Advocacy and Policy Committee and Scholarship Committee.  Sandra has also been a FACL mentor, and has participated in the Conference Planning Committee for a number of years.

Sandra has also devoted a large part of her career to public service.  After being called to the bar in 1999, she practiced litigation at a large New York firm for four years, and then with the Department of Justice for nine years.  Since 2013, Sandra has been Counsel with the Ministry of the Attorney General, Crown Law Office Civil. 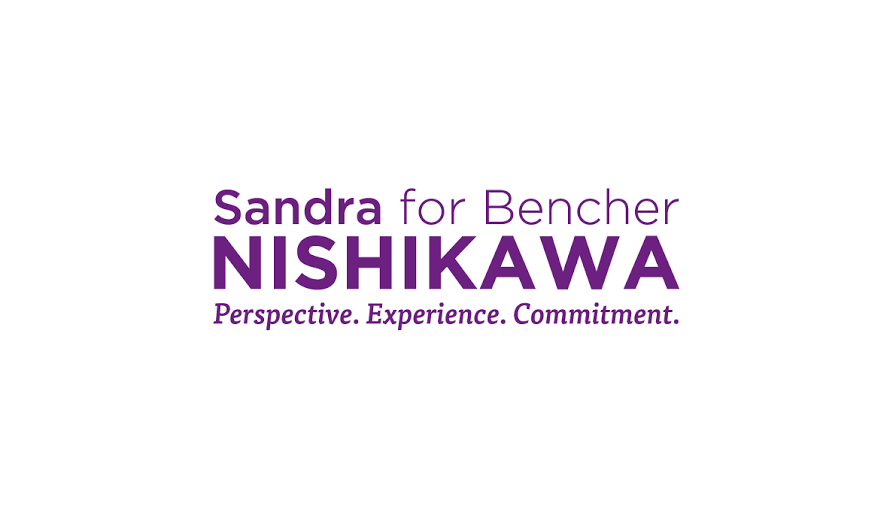 Paul Schabas is currently a partner at Blakes, Cassels & Graydon LLP.  He started in criminal defence before moving to a large firm where he litigates commercial, constitutional, criminal/regulatory and media law.  His election statement strongly supports access to justice, diversity and equity issues.  For further information about Paul’s campaign, please visit his website: http://www.paulschabas.ca/

Outside the courtroom, Paul is a bencher of The Law Society of Upper Canada (elected in 2007 and 2011), the governing body of Ontario’s 42,000 lawyers where, among other things, he adjudicates professional discipline matters. He is a past president of the Canadian Media Lawyers Association and Pro Bono Law Ontario, of which he was a founding director. Paul is a Chair of the Law Foundation of Ontario as well as a director of the Canadian Civil Liberties Association and The Osgoode Society for Canadian Legal History. He is a former director of The Advocates’ Society, Family Service Toronto, the National Youth Orchestra of Canada and Lawyers Rights Watch Canada.

Within Blakes, Paul has chaired and/or been a member of numerous management committees, including multiple terms on the Executive, Partnership and Partner Compensation Committees. He founded and chaired the Firm’s Pro Bono Committee and chaired the Student Committee.

He was also the founding chair of Lex Mundi’s Pro Bono Committee and now past chair of its Business Crimes Practice Group.

The following are Bencher candidates from RODA member associations who self-identify as from racialized/equity-seeking backgrounds:

Unless otherwise noted, the above candidates are from the Toronto Region.

To assist you in understanding the Bencher candidates’ platforms on diversity, the Roundtable of Diversity Associations prepared a survey which was distributed to all Bencher candidates. Visit this link to review their responses: https://www.surveymonkey.com/results/SM-TJGD5B27/browse/.

With respect to the current benchers who are seeking re-election, you may be interested to know the voting record in the accreditation of Trinity Western University (TWU) law school in British Columbia.  CLICK HERE to read a summary of the TWU issue and FACL’s position.

FACL and RODA encourages all members to review each candidate’s platform and survey responses on issues of concern to us.  Inform your vote in the upcoming election.

The Law Society of Upper Canada has sent instructions for voting to every licensed lawyer. Online voting is now available through to the end of April 2015. The formal election day is April 30, 2015.

For more information about the 2015 Bencher Election voting procedures:
http://www.lsuc.on.ca/with.aspx?id=2147500122

Request to all members of FACL:

Voter turn-out is traditionally low for Bencher elections, and the cause of increasing diversity requires engagement.

Pass on this information to others who are committed to seeing increased
diversity at Convocation, and ask those others to also pass on the information.